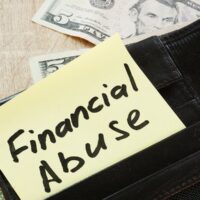 The case of Nice vs. U.S. is a dramatic example of what can happen when there are no professionals involved in an elderly person’s finances and one person has the power to make transactions without supervision. In the article “Tax case reveals possible intrafamily fraud” from Financial Planning, a trusted son allegedly decimated his mother’s IRA and left her estate with $500, 000 tax bill.

Mrs. Nice and her husband had been married for more than 60 years. Before he died in 2002, her husband arranged to leave significant assets for his wife’s care. Their son Chip was named executor of the husband’s estate and moved in with his mother. In 2007, she was diagnosed with dementia. As her condition deteriorated, Chip allegedly began fraudulent activities. He gained access to her IRAs, causing distributions to be made from the IRAs and then allegedly taking the funds for his own use.

Chip also filed federal income tax returns for his mother, causing her to execute a fraudulent power of attorney. The federal tax returns treated the IRA distributions as taxable income to Mrs. Nice. She not only lost the money in her IRA but got hit with a whopping tax bill.

In 2014, Mrs. Nice’s daughter Julianne applied for and received a temporary injunction against Chip, removing him from her mother’s home and taking away control of her finances. Chip died in 2015. A court found that Mrs. Nice was not able to manage her own affairs and Mary Ellen was appointed as a guardian. Julianne filed amended tax returns on behalf of her mother, claiming a refund for tax years 2006-07 and 2009-13. The IRS accepted the claim for 2009 but denied the claims for 2006 and 2010-2013. The appeal for 2009 was accepted, but the IRS never responded to the claim for 2007. Julianne appealed the denials, but each appeal was denied.

By then, Mrs. Nice had died. Julianne brought a lawsuit against the IRS seeking a refund of $519, 502 in federal income taxes plus interest and penalties. The suit contended that because of her brother’s alleged fraudulent acts, Mrs. Nice never received the IRA distributions. Her tax returns for 2011-2014 overstated her actual income, the suit maintained, and she was owed a refund for overpayment. The court did not agree, stating that Julianne failed to show that her mother did not receive the IRA funds and denied the claim.

There are a number of harsh lessons to be learned from this family’s unhappy saga.

When IRA funds are mishandled or misappropriated, it may be possible for the amounts taken to be rolled over to an IRA, if a lawsuit to recover the losses occurs in a timely manner. In 2004, the IRS issued 11 private-letter rulings that allow lawsuit settlements to be rolled over to IRAs. The IRS allowed the rollovers and gave owners 60 days from the receipt of settlement money to complete the rollover.

Leaving one family member in charge of family wealth with no oversight from anyone else—a trustee, an estate planning attorney, or a financial planner—is a recipe for elder financial abuse. Even if the funds had remained in the IRA, a fiduciary would have kept an eye on the funds and any distributions that seemed out of order.

One of the goals of an estate plan is to protect the family’s assets, even from members of their own family. An estate plan can be devised to arrange for the care of a loved one, at the same time it protects their financial interests.

By Fisher Law LLC | Posted on July 2, 2020
« What are the Latest Senior Scams?
Quirk in Medicare System’s Observation Status »