What Does “Intestate” Mean? 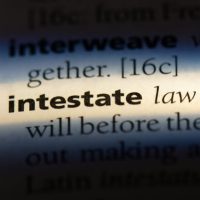 The word “intestate” might sound somewhat daunting and foreign, like most vocabulary associated with estate planning, but it is actually a rather straightforward concept. The estate of someone who dies is considered intestate if the person dies without a will. A will is generally used in order for a decedent during his or her life to draft an estate plan that will  dictate how they want their assets distributed after their death. In the absence of these written instructions, the state will use the intestate succession statutes enacted by the Massachusetts legislature in order to determine how the decedent’s estate will be distributed. So, in short, intestate means that someone has died without a will.  Instead of their own preferences controlling  the distribution of their assets, the state’s intestate succession statutes will govern.

Whether a decedent has a will or not, their estate will have to go through probate if they own any asset in their own name and that assets does not have a transfer on death or pay on death designation.  If, however, (i) assets have been transferred to a trust during life or at the time of death or (ii) an asset is co-owned with another individual at passing (for example, a suriving spouse puts her children on her bank accounts as joint owners), these assets will bypass the probate process. If you do not want your assets to be distributed in accordance with the Massachusetts intestate succession statutes, it is important that you plan accordingly and either create a valid, written will that meets all state requirements for enforcement, or create an alternative estate plan with the help of an attorney that may involve a living trust and/or joint ownership of assets.   Trusts allow you to skip probate by transferring your assets out of your ownership and into the ownership of the trust so that they are no longer part of your estate. Adding co-owners with survivorship rights to other assets, such as bank and retirement accounts, will transfer the asset automatically to the co-owner upon your death. Because these assets are no longer the property of the decedent, they will not need to be settled or distributed in probate.

If you are ready to develop a comprehensive estate plan or require assistance with an estate planning matter, contact the Norwood estate planning lawyers at Fisher Law, LLC to schedule a consultation.

By Fisher Law LLC | Posted on September 23, 2022
« Who Gets Paid First From An Estate?
Do I Need A Health Care Proxy For My College Student? »